In this project students write a program to find the least common multiple of two small numbers.

This sketch was developed for Common Core math standard 6.RP.B, but it also meets 6.EE.A, 6.EE.B, and 7.EE.B because it uses variables, equations, and inequalities. In addition, this project is aligned with the Next Generation Science Standards for engineering at the middle school level (MS-ETSI-1, MS-ETSI-2, MS-ETSI-3, and MS-ETS1-4).

This sketch was developed to meet Common Core math standard 6.NS.B: “Compute fluently with multi-digit numbers and find common factors and multiples.” In this project students write a program to find the least common multiple of two small numbers. The Hummingbird sensors are used to select the two numbers.

The Hummingbird controller consists of two rotary knobs attached to sensor ports 1 and 2. The output from these sensors is converted to an integer from 1 to 11 using the round block, as well as the subtraction and division operators. 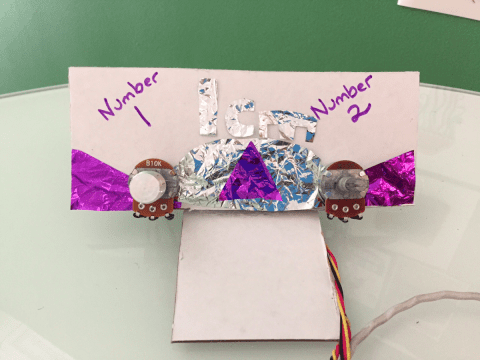 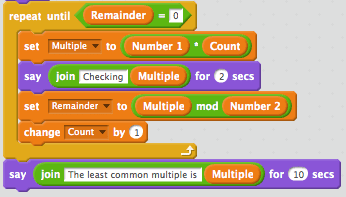