The micro:bit contains an accelerometer. This sensor can be used to measure the orientation of the Finch. For example, you can detect when the Finch is upside down. The micro:bit accelerometer is very similar to the accelerometer that enables a smartphone or tablet to change the screen from portrait to landscape when the user turns the device. 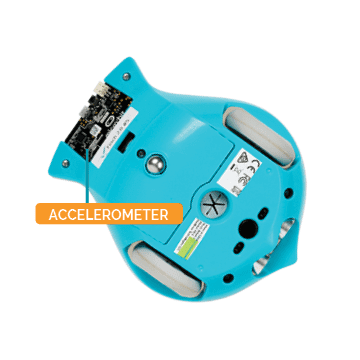 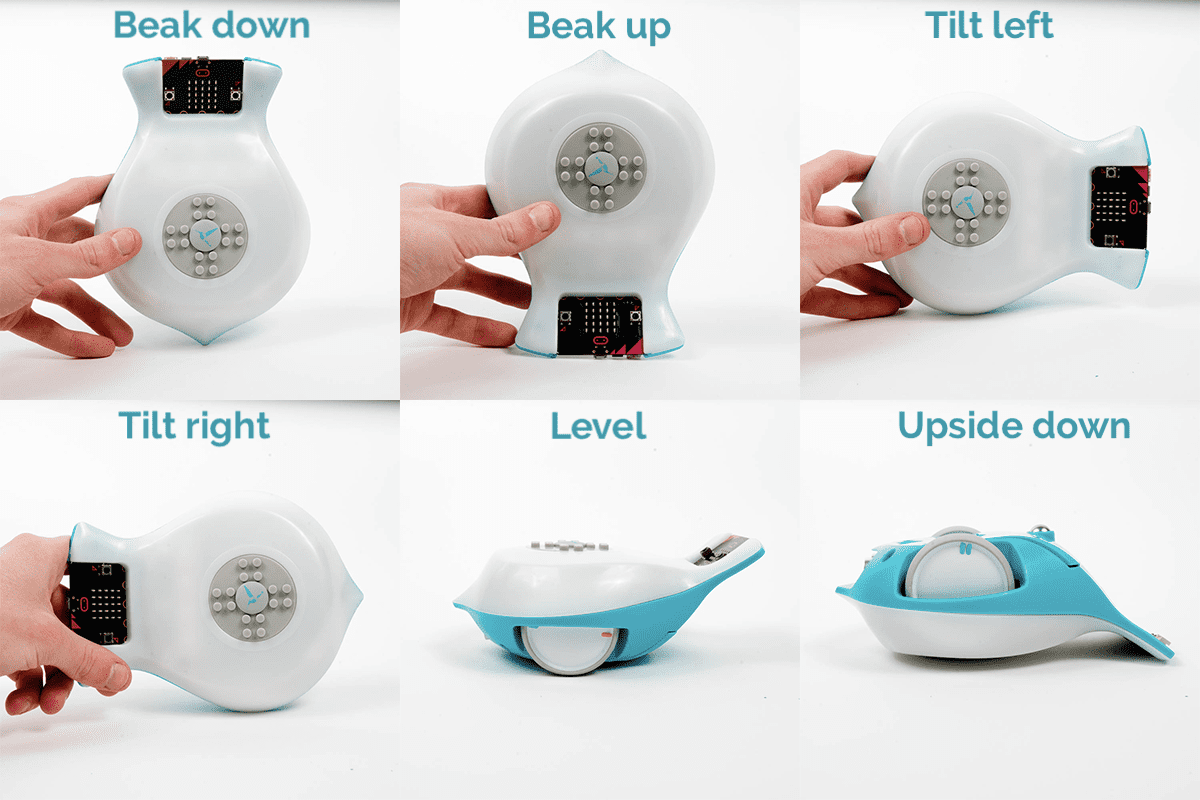 For example, this code checks whether the left wing of the Finch is down. If this is true, then the beak turns on. Otherwise, the beak is off.

Program the Finch to turn in a wide arc until you pick up the Finch and turn it upside down.

Try out the code above. Then modify it to add other colors when the Finch is in other positions. How many colors can you add?

If your Finch contains a micro:bit V2, you can also use a temperature sensor in the micro:bit to measure the temperature around the Finch in degrees Celsius. The getTemperature() method returns the value of this sensor. Room temperature is about 20°C. If you don’t have a micro:bit V2 in your Finch, you will see an error when you use this method.

Write a program that uses the Finch’s lights to tell you when the Finch is too hot, too cold, or just right.

The getAcceleration() method returns a three float values that measure the acceleration in m/s2 in the x-, y-, and z-directions; these values are roughly between -10 and 10. The code below stores the three values in variables with informative names.

Write a program that repeatedly prints the x-, y-, and z-values for acceleration to the screen. Remember to read new acceleration values within the loop. The program should stop when the Finch detects that it is dark. Test your program by tilting the Finch in different directions. When is the z-acceleration close to 10? How can you detect that the Finch’s left wing is pointing at the ground?

Write a program that uses the x-, y-, and z-values for acceleration to set the amount of red, green, and blue in the Finch’s beak and tail. The program should run until you press button A.

Turn your Finch into a timer. Allow the user to input a number of seconds. When that time is up, the Finch should do whatever is necessary to get the user’s attention. The Finch should continue to act until the user shakes the Finch with an acceleration that has a magnitude greater than 20 m/s2 squared.

In this exercise, you will make the Finch climb a hill. You will need a board or table that you can tilt to make your “hill.” It should be tilted about 15°.